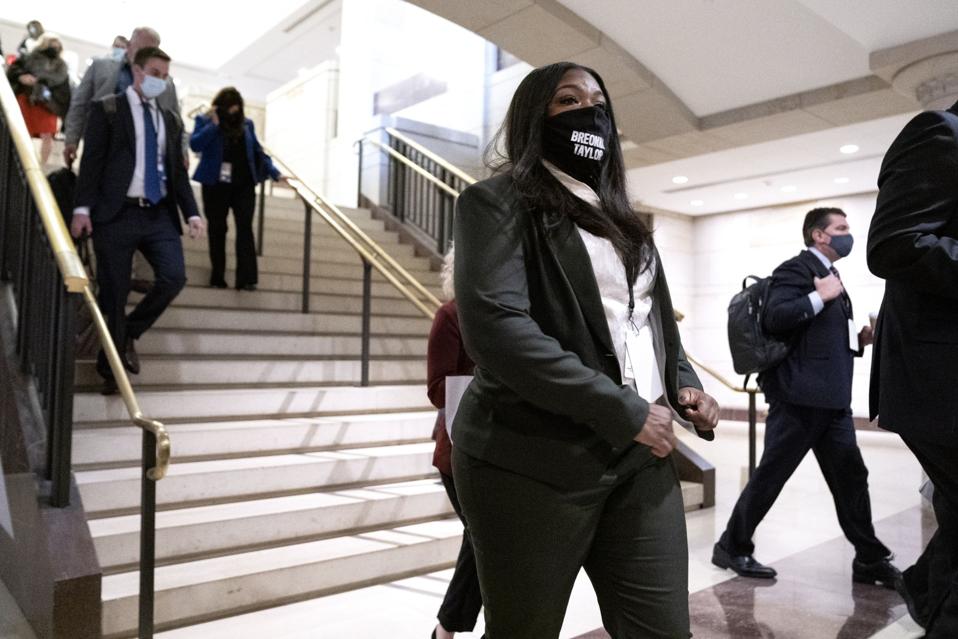 As dictated by the Constitution, the Senate chambers convened this past Sunday, January 3rd at noon, so that the 117th Congress could be officially sworn in. The class of lawmakers is the most diverse in history, boasting several historic firsts for women as it brings more women to the halls of Congress than any class before it and more women of color. Though the freshman congresswomen have only just taken their oaths, donned their new Congressional pins, and started work on setting up their offices, all eyes are already on a few newcomers. Dubbed the women to watch, these three congresswomen are likely favorites for pushing policy early on and shaking up the 200-year old chambers of Congress.

Rep. Cori Bush became the first Black woman to represent Missouri in Congress this week. The 44-year-old St. Louis native is a registered nurse, an ordained pastor and an activist. She marched on the streets in Ferguson following the shooting of Michael Brown and first gained national notice after being featured in the documentary, Knock Down The House, and defeating 10-term incumbent Lacy Clay in the primaries.

Bush has already built a reputation for telling it like it is and leaning on her own experiences to inform her political directives. Throughout her campaign, Bush spoke openly about previously living paycheck to paycheck, being burdened with student debt, and experiencing homelessness, police abuse and domestic violence throughout her life. She ran with a succinct message, telling the people of Missouri’s 1st Congressional District that she was in the race to represent the people of the district because she knew what it was like to be them.

Bush showed up to freshman orientation week at the Capitol wearing thrifted clothes and a Breonna Taylor face mask—a gesture lost on some of her Republican colleagues who referred to Bush as Breonna, assuming it was her own name on the mask. While it’s clear some colleagues are still getting to know Bush, the congresswoman from St. Louis is already being likened to the younger, more outspoken progressives of the Democratic Party and, seemingly, already dubbed a member of the much-buzzed-about “squad.”

Bush has plenty of hefty policy agendas she hopes to push—including making medicare for all a reality, addressing police reform and enacting the Green New Deal. She hopes to take on campaign finance reform, eliminate student debt and is committed to passing protections for the LGBTQ community. While Bush’s legislative goals are certainly ambitious—even in a Democratic-led House—the Show-Me-State representative is one to watch in the coming months as she continues to speak her mind and brush elbows with the younger, more progressive contingent of the House.